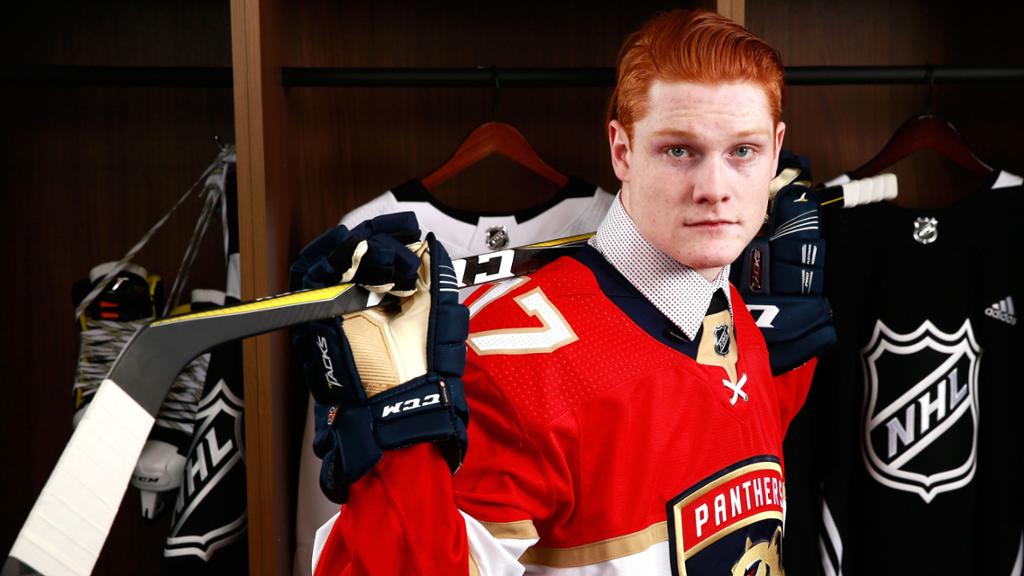 What to Expect From Owen Tippett

On October 1st, 2017, the Florida Panthers announced a few changes to their roster. They released forwards Brandon Pirri and Harry Zolnierczyk from their professional tryouts (PTOs), meaning that forward Owen Tippett is still on the roster. This could mean a variety of things, but there’s a huge chance that he will be in the opening night lineup and that he could stay with the NHL team for the season. Although he does have a devoted following from playing in juniors, many fans are still wondering what kind of player he is, and what to expect from him as a Florida Panther.

Owen Tippett has been playing some level of professional hockey since 2013 when he was just 14 years old. He played for the Toronto Red Wings Minor Midget AAA team of the GTMMHL for two years, appearing in a total of 81 games. He notched 108 points (67 goals and 41 assists) collectively over the two campaigns. In his second season there, he was named the captain of the team. In the middle of the 2014-2015 season, he was moved up to the Toronto Red Wings Midget AAA team of the GTJHL. Before even playing a game there, he was promoted again, this time to the Toronto Jr. Canadiens of the OJHL. He played six games and put up three points (two goals and one assist.)

By the time the 2015-2016 season came around, Tippett was a member of the Mississauga Steelheads, the team where he would really establish himself in the hockey world. During his first season, he played in 48 games, ending the regular season with 20 points (15 goals and 5 assists). He also played in seven games in the playoffs, ending the run with three points (one goal and two assists.) In the 2016-2017 season, he played 60 games, scoring 75 points (44 goals and 31 assists.) Additionally, the winger participated in 20 playoff games, finishing with 19 points (10 goals and nine assists), and as an OHL Eastern Conference Champion. Tippett had a very successful year and a very successful career in juniors, and to top it all off, he was eligible to be drafted into the NHL.

The Florida Panthers drafted Owen Tippett with the 10th overall pick in the 2017 draft. He was seen as a long shot to make the NHL club due to his age and experience. But as of October 1st, the Panthers have made their final cuts. Their roster is now made up of 23 players, and Tippett is one of them. There’s a chance that he dresses for the season opener against the Tampa Bay Lightning, but he also might not.

Now, Florida has many options when it comes to this young forward. Obviously, they can keep him up in the NHL. If he doesn’t show signs of success early on, he can be sent down to the Springfield Thunderbirds, the Panthers’ AHL affiliate. Furthermore, Tippett can also return to his junior club. If he remains in the NHL, one year of his entry-level deal will be used up. He can be sent down to the AHL at any point in the season. Prior to roster cuts, he could have just been returned to Mississauga. Now, the Panthers have the option to give him a nine NHL game tryout. This would probably be the best option because fans will get to see how he plays in the NHL, but he will still get some more playing time and experience in the OHL, where he’s comfortable.

So if he stays in the NHL, what can Panthers fans expect from Owen Tippett? The 18-year-old has compared himself to Phil Kessel, because of “the speed, the shot, the way he can make plays.” If Tippett sticks, he will most likely play on the second line with Vincent Trocheck and Radim Vrbata. This will be the best place for him to show off his skills and show fans what he can bring to the team. If he doesn’t, he will get experience in a lower level of hockey, like the AHL or OHL. No matter what happens, this will be an interesting year for Owen Tippett. This will be the first time that Panthers fans will really be paying attention to him, and he won’t want to disappoint.

Do you think that Owen Tippett will stay with the NHL’s Florida Panthers, the AHL’s Springfield Thunderbirds, or the OHL’s Mississauga Steelheads? Let us know by tweeting us: @PuckItUpBlog.