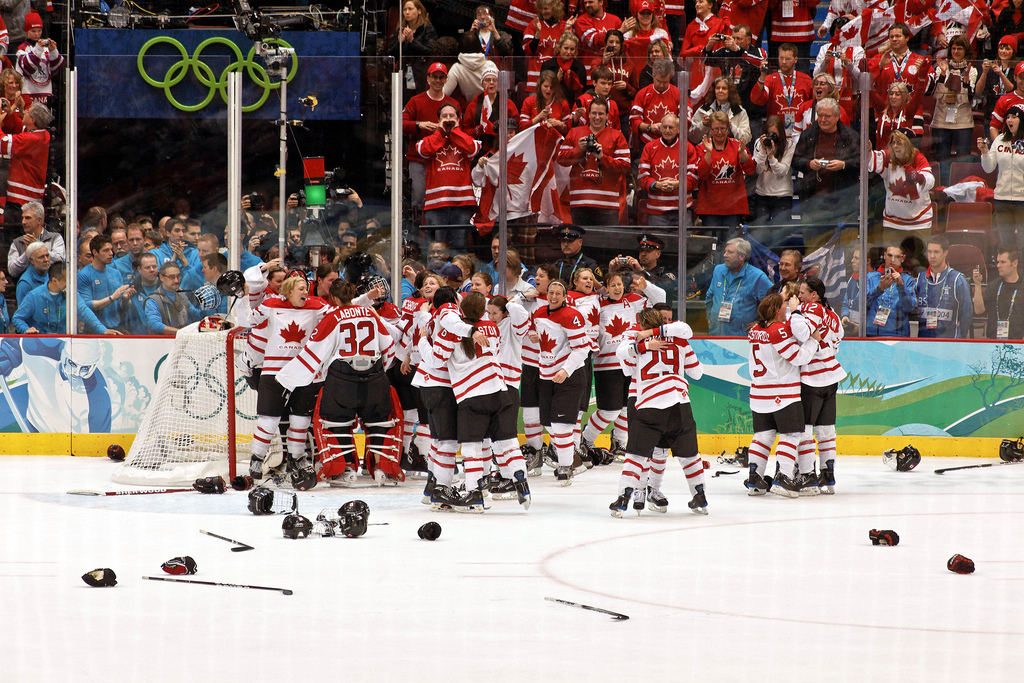 So you just watched the USA vs. Canada women’s hockey gold medal game the other night. I’m assuming you did, because, well, everyone did. Let’s say you loved it, and you want to continue to support women’s hockey. It’s an amazing cause to get behind, and the world of women’s hockey has made a ton of progress over the past few years.

But like many other organizations, sometimes it is hard to figure out exactly how to start supporting women’s hockey. Luckily for you, rookie fans, I have put together a few quick and easy ways for you to introduce yourself to the world of women’s hockey! There are two main leagues, the CWHL and NWHL, but there are obviously tons of women’s hockey groups all over the world.

The CWHL, or Canadian Women’s Hockey League, was established in 2007. It’s made up of seven teams; four in Canada, two in China, and one in the United States. Those teams are the Calgary Inferno (formerly the Alberta Honeybadgers from 2011-2012), Les Canadiennes de Montreal (formerly the Montreal Stars from 2007-2015), Markham Thunder (formerly the Brampton Thunder from 1998-2017), Toronto Furies, Kunlun Red Star WIH, Vanke Rays, and Boston Blades. The first ever CWHL Entry Draft was held in 2010 at the Hockey Hall of Fame in Toronto, Ontario, Canada. The selections are made entirely from colleges rather than mainly minor league teams like the NHL. Some of the more recognizable players who have participated in this league include Zoe Hickel, Marie Philip-Poulin, Kelli Stack, and Meghan Agosta. Instead of the Stanley Cup, they play for the Clarkson Cup at the end of every season.

How can you support these amazing ladies? Well, if you are in Canada, China, or the Boston area, you can absolutely buy tickets and go to games! The link to buy tickets can be found here. The league also suggests donations that go directly to growing the game and the organization. The donations can be one-time, monthly, or even more frequent. The link for more information on that can be found here.

Want to watch games, but you’re not in an area with a CWHL team? A full schedule with links to stream past, present and future games from the 2017-2018 season can be found here. If you want to watch a specific game from a past season, you can watch games from as far back as five years ago (the 2013-2014 season) by clicking here. You can also reach out to the league on Twitter here!

The NWHL, or National Women’s Hockey League, was created in 2015. The “founding four” (the original four teams in the league) are known as the Boston Pride, Buffalo Beauts, Connecticut Whale, and New York Riveters. These teams all still exist, except the New York Riveters are now the Metropolitan Riveters. The special thing about the NWHL is that it is the first women’s hockey league in the United States that pays its players. Aside from their regular salary, players also get 15% of each sale made on their jersey or “shirsey” (name and number shirt).

The minimum player salary used to be $10,000 but has since dropped to $5,000, unfortunately. But to soften the blow a bit, players from the home team are able to split the revenue from tickets sold in excess over 500 for each game. The NWHL also has significant ties to the NHL. The Riveters and New Jersey Devils have a partnership since the “Rivs” play in the practice arena of the Devils, the RJW Barnabas Health Hockey House in Newark, New Jersey. The Devils often promote the Riveters and their games on social media and even hosted them for a doubleheader on October 28th, 2017, when the Riveters faced the Boston Pride in the afternoon, and the Devils took on the Arizona Coyotes that night.

Similarly, the owners of the Buffalo Sabres purchased the Buffalo Beauts. The NWHL All-Star game has been backed by NHL teams like the Pittsburgh Penguins and Minnesota Wild in the past. The Boston Bruins have supported the Pride in the past, though no official partnership exists. Recently, the Hartford Wolf Pack (New York Rangers AHL team) has been connected to the Connecticut Whale as well. At the end of every season, these ladies play for the Isobel Cup, which has only been won by Buffalo and Boston so far.

Now for how you can help this league continue to thrive. There are many exciting storylines in the NWHL, from huge winning streaks by the Beauts and Riveters this season, to the first openly transgender athlete in the United States (Riveter and Isobel Cup Champion Harrison Browne), to teams continuing to survive without Olympic athletes. The best way to experience these amazing things is by attending games! Tickets can be bought here. If you can’t actually make it to games, you can become a “ticket ambassador.” This means that when you buy tickets, they will be given to organizations and people who normally would not be able to go to games. You can sign up for this program here. A full archive of past games, going all the way back to the 2017 Skills Competition, is here for your enjoyment.

You can also watch games live every weekend by clicking here or looking to see if the game is being streamed on Twitter. Think you have what it takes to play in the league yourself? As long as you have completed your college eligibility, you can apply for that here. Merchandise (which directly supports players) can be bought here. Finally, you can get in touch with the league by tweeting them here or using their “contact” page here.

So are you ready to support women’s hockey after that amazing gold medal game? Share your thoughts with us by tweeting us: @PuckItUpBlog.